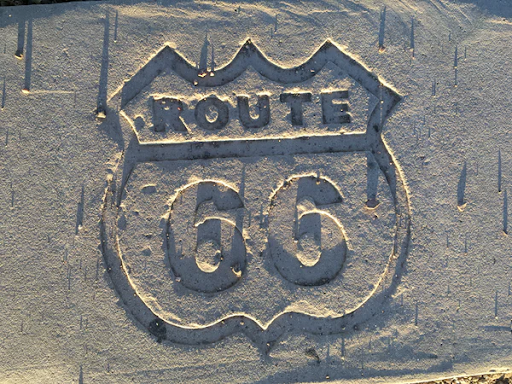 Route 66 was one of the first major highways in the United States. Built in 1926, it is still a well-known and beloved highway in our nation. Many travel destinations on Route 66 hold records for being the largest or oldest of its kind in the U.S. When traveling on this highway, here are the top ten places you cannot miss out on:

Perhaps the most important stop to make on Route 66 would be the Grand Canyon National Park in Arizona. The Grand Canyon was formed out of volcanic rock about six million years ago, making for 277 miles of breathtaking views. Be sure to visit the Grand Canyon Village, South Rim, and Havasu Falls, along with the trails.

This little village began as a mining camp after a large sum of gold was found in its location in 1915. Now home to roughly 100 people, it is still a popular stop on Route 66. You can grab a bite to eat at the Oatman Hotel, where the inside of the restaurant is covered in dollar bills. If you have a sweet tooth, you can visit the Olive Oatman Ice Cream Parlor and the Oatman Candy Shoppe.

Located in Arizona, the Petrified Forest is known for its fossils. The park holds 221,390 acres of land, which includes hundreds of species of plants, animals, and historical sites. The forest gets its name from its petrified wood that causes the wood to change color. In this national park, be sure to explore the Painted Desert, Rainbow Forest, Rainbow Forest Museum, and Blue Mesa.

Founded in 1895, Seligman prospered then and managed to fight through time to prosper today as well. Despite modern times, the town still has the 20th century feel that takes you back in time. In this small town, explore the many gift shops, along with the Arizona Territorial Jail and the Return to the 50s Museum. When you finish all of these, replenish your energy by eating at the Roadkill Cafe where you can try their various steaks, burgers, BBQ products, and more!

Springfield, Missouri is home to Fantastic Caverns. This is the only cave located in North America that has ride-through tours. These tours last about an hour and display the cave’s beautiful features, including columns and shiny minerals. Fantastic Caverns can be visited at any time, despite the weather or time of year, so don’t let either of those things stop you from experiencing this gorgeous sight!

Built between 1610-1626, the San Miguel Chapel in Santa Fe, New Mexico is known as the oldest church in the continental United States. Be sure to visit to see the old architecture, along with the art inside. While you are there, be sure to attend a service because, despite its age, this church is still in use!

Sky City is a part of the village of Acoma Pueblo, a Native American settlement located in New Mexico. This city holds the title for the oldest settlement in North America that has been continuously inhabited and now holds less than 50 tribal members. Sky City was built on a 367-foot bluff and is known for its art and culture. Be sure to visit the Sky City Cultural Center and Haak’u Museum, Sky City Casino, and Sky Tower. After an exhausting day of tourist activities, stay the night at the Sky City RV Park.

The Blue Whale of Catoosa, located in Catoosa, Oklahoma, has become a very famous tourist attraction on Route 66. This whale was built by Hugh S. Davis as a waterfront structure in hopes his grandchildren would be able to play in its location. Little did he know, people would come to love this unique structure and actually travel to see it. At the Blue Whale’s sight, you can spend the day fishing and swimming with your friends and family.

Cadillac Ranch is an outdoor art display in Amarillo, Texas that people from all around come to see. Created by a group of artists known as The Ant Farm, the display includes ten Cadillacs whose front ends were buried into the ground. Since then, visitors have graffitied and stolen bits and pieces from the cars and yet it still remains as a must-see attraction on Route 66.

Palo Duro Canyon in Texas holds the name as the second-largest canyon in the United States, just behind the Grand Canyon at about 120 miles long. Visitors have the opportunity to explore the beauty of the canyon through hiking, biking, and horse trails. There are also several campsites to choose from to extend your stay and a gift shop to purchase souvenirs to remember your trip to this beautiful park.

Other hours available by appointment

This form is safe & secure.